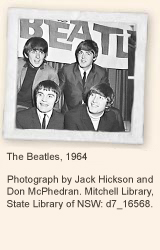 The 1960s saw many groups of Australians questioning the old established ways. The changes that would take place in the society and economy in the decades to come started in the questions of the 1960s. Women continued their campaign for independence and equality and First Nations people continued to place recognition of land and economic rights on the agenda.

First Nations peoples saw significant change this decade when they were granted the right to vote at national elections in 1962. That same year, Jimmy Little co-founded the All Coloured Show, a tour of First Nations artists, performing at hotels and clubs across New South Wales that otherwise banned or segregated people of colour. Charles Perkins, along with other University of Sydney students, visited regional Australia as part of the Freedom Rides in 1965 to gather information about the segregation of First Nations peoples. In the 1967 referendum the Australian people voted overwhelming in favour of the national government taking over Indigenous policy from state and territory governments, and that First Nations people should from now on be counted in the census.

Significant post-war migration from countries other than the United Kingdom was transforming Australian culture and society. European migrants, and their children who had grown up in Australia, were making their mark in business, employment, and education. For the first time in 1966, all potential migrants to Australia were assessed not on their race or nationality but on their skills and ability.

At the beginning of the decade, the war in Vietnam appeared like a small military engagement in a faraway place. Advisers, then troops and conscripts were sent to Vietnam to support South Vietnam’s fight against the Communist north, and in support of the American led efforts there. In 1966 the first visit to Australia by an American President, Lyndon B. Johnson, led to large street gatherings to welcome him and show support for America in the world. Opposition to Australia’s involvement in the war though was growing. Conscription of Australian men to fight in Vietnam became unpopular, as too did the war itself with the first televised images of the impact of war on the people seen in lounge rooms around the nation.

First Nations people get the right to vote at national elections, 1962.

Roma Mitchell became the first female Supreme Court judge in Australia, when she was appointed to the South Australia court, 1965.

First battalion of Australian troops sent to the war in Vietnam, 1965.

Women could now keep their jobs in the Commonwealth Public Service after they married, 1966.

Decimal currency as in dollars and cents introduced, 1966.

The last tram runs in Sydney as the La Perouse Line shuts, 1961.