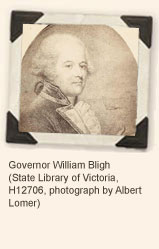 During this first decade of the 19th century, the small colony of Sydney was still very much a convict outpost. In 1804, the population of New South Wales was about 7,000, with it being 80% men. Relying almost completely on the British government for direction and money, the merino wool industry, though still being established, was showing promise. Free migration was increasing and the growing number of emancipated convicts were keen to make a life in Australia rather than Britain.

Discontent with the governor and the English authority over the convicts had erupted at the Second Battle of Vinegar Hill. On 4 March 1804, an uprising took place when mainly Irish convicts who were working at the Government Farm, seized arms and planned to march on Sydney. They resented the discriminatory practices by the English towards the Irish convicts. The uprising was quickly defeated.

As the decade progressed, a struggle for power and authority of another kind took place between the Governors – Phillip King and William Bligh - and the New South Wales Corps, a military unit sent to maintain order in the colony. This power struggle was dominated by a few powerful men who controlled the key positions, and the currency of the day – a form of alcohol known as rum. This struggle culminated in a military coup against Governor Bligh in 1808, known as the Rum Rebellion. Bligh was removed from office by the New South Wales Corps who remained in power for two years, until Governor Macquarie was appointed and arrived with his own military unit.

As well as merino sheep, the New South Wales colony looked to the sealing and whaling industry as a source of income. Whale oil was widely used at that time for cooking lamps and fuel, while seal furs fetched high prices for their quality. Both products were sold into Britain and China. By 1802, there were 200 sealers in the Bass Strait resulting in large numbers of whale and seal kills. Alongside these kills, First Nations communities continued cultural practices of whaling. Yuin peoples built mutually beneficial relationships with dolphins and killer whales to assist in whale hunting as a method to ensure sustainable practice.

Frontier warfare spreads across the Hawkesbury River as First Nations peoples resisted the new arrivals, 1800 to 1806.

The Rum Rebellion by miliary men overthrow the governor, 1808.

First white settlement in Tasmania, at Risdon in 1803 and then at Sullivan’s Cove which became Hobart in 1804.

First windmill in Sydney at Parramatta to pump water, 1804, with seven by 1809. Windmills were used to pump water and power flour mills.