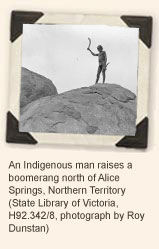 Australia’s First Nations are represented by many peoples with over 250 distinct language groups with their own land boundaries who have responsibility for land management and culture work for that region.

At the beginning of the 1770s, the eastern and southern coasts of Australia were unknown to European and British explorers. The Dutch had explored the west coast and had sailed past and named Van Diemen's Land. James Cook, a captain in the British Royal Navy, visited the east coast of Australia in 1770, landing first at Botany Bay. He travelled north charting the coastline to the tip of the continent. He noted the great number of fires along the coast and on the islands and concluded that the land was inhabited. Later in this journey, he took possession of the east coast in the name of the British King, George III. As Cook had not been successful in establishing contact with the First Nations peoples at Botany Bay, he was unaware of the territorial structure of Indigenous communities. The Aboriginal nations remained unaware that they were now considered by Great Britain to be British subjects.

During the voyage of the HMB Endeavour up the east Coast in 1770 First Nations peoples used signal fires as an emergency response to warn neighbouring nations of the boat sightings. Sophisticated cultural knowledge of fire included interpreting smoke from afar as a form of communication as smoke for ceremonies, campfires, cultural burning or, as in this case, signal fires. When Cook sailed the east coast signal fires were maintained on headlands to communicate the warning. While the ship’s crew noted smoke and fires, they lacked the cultural knowledge to see that an emergency response system was travelling the coastline.

James Cook and HMB Endeavour crew visited along the east coast of Australia, 1770.

Scientist and explorer Joseph Banks, who had accompanied Cook, told the British Parliament that Botany Bay would be a suitable convict settlement, 1779.

Kaurareg people prepared for the threat of Cook and the HMB Endeavour approaching Kaiwalagal (islands of the Torres Strait) with increased production of klakal (spear).