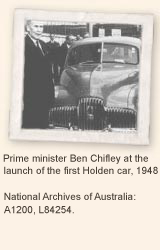 The Second World War brought significant social, political and economic change. At first Australia provided troops to Britain and the Allied effort in Europe fighting the war against Germany but was soon forced to bring the troops home to defend Australia. Japan, who was aligned with Germany, bombed Pearl Harbour, an American naval base in 1941 and then took the British base in Singapore in 1942. Towns across the northern coast of Australia were bombed by the Japanese, and Japanese submarines were spotted along the eastern coast of Australia including in Sydney Harbour.

American forces under General Macarthur arrived in Australia in 1942 to lead the Allied efforts against the Japanese in the South Pacific. Australian forces fought through the Pacific and South-East Asia including Papua, New Guinea, Borneo, Malaya and the Philippines. One million Australians served in the defence forces, including women in the newly formed auxiliary arms filling the jobs previously undertaken by men. Women also backfilled positions in manufacturing, banks, shops and transport, proving that women could do non-traditional jobs often requiring physical labour. As the war drew to a close, with an Allied victory, Australians also became part of the British Occupying Forces in Japan, and saw the damage caused by the two atomic bombs dropped by the Allied forces on Nagasaki and Hiroshima in 1945.

Hopes for a lasting peace, including a global rules-based order, saw Australia actively participate in the formation of the United Nations (UN). It was a founding member of the UN in 1945 and was instrumental in the writing of the first UN Declaration of Human Rights in 1948. The welcoming of the first non-British migrants from Estonia, Lativa and Lithuania in 1947 were also a first step by Australia to expand its population under the ‘populate or perish’ mantra and to gradually become a more multicultural society.

The post-war years saw a housing boom as the Australian and state governments built houses for the demobilised men and women of the defence forces. Many women who had worked for the defence forces, government or private industry during the war were required to give up their jobs for returning men or upon their marriage.

During the Second World War, First Nations men and women also served in the defence forces yet faced discriminatory practices at home. The Australian Aboriginal League, and other activists, protested their exclusion from jobs and social activities. In 1946 over 800 First Nations workers and their families walked off stations across the Pilbara in Western Australia. They left the stations in protest over the lack of personal freedom, poor pay - often only rations - and poor living conditions. The strike continued for three years and resulted in improvement in conditions for the workers.

Jessie Street and other women issued the Australian Women’s Charter, 1943.