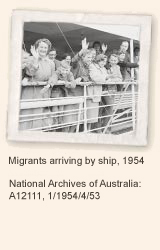 During the decade of the 1950s, many Australians worked to build homes and families and enjoy the good times, keen to move on from the distress and struggle of the Great Depression and the Second World War. Cars were now affordable for the average family. More suburbs and homes had access to electricity, sewage and running water. This meant more families could buy electric refrigerators and radios. New suburbs were built causing the major capital cities to grow out from their older centres.

The ambitious new migration program that had started in 1947 continued, seeking to attract non-British migrants to Australia. Post-war refugees from Europe including Ukraine, Lithuania, Greece, Italy, Poland, Germany and the Netherlands established significant communities. Their culture and stories helped transform Australia into a multicultural society.

Many migrants from Eastern Europe were fleeing the communist governments imposed after the Second World War. The years 1947 to 1991 were known as the Cold War and were dominated by a stand-off between USA and USSR (Russia). Tensions between the two, and the countries allied to them, were based on different world views, economics (capitalism versus communism), military power and territorial disputes. In Australia, tension over the influence of Australian communists in trade unions led to a split in the Australian Labor Party.

In 1957, Artist Albert Namatjira, an Arrernte man was granted Australian citizenship. As a citizen he could now be counted in the population, vote in elections and own property. At this time, Aboriginal people had to apply for citizenship and meet certain criteria. The Federal Council for Aboriginal Advancement was formed in 1958 with the aim to organise and unite the various state-based groups to lobby for the national government to take over Indigenous policy and to remove the discriminatory rules in place at the state and territory levels.

The Federal Council for the Advancement of Aboriginals established, 1958.

Attempts to ban the Communist Party of Australia defeated by the High Court, and then voted against at the 1951 referendum.

Television arrived in Australia just in time to watch the Melbourne Olympic Games, 1956.

The first Opera House lottery held in New South Wales to raise money for its construction, 1958.

The world’s first model of the aeroplane black box recorder demonstrated in Australia, 1957.