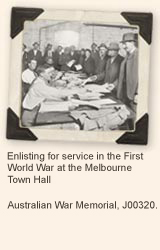 At the beginning of this decade, royalty and aristocracy continued to be at the centre of decision-making and popular culture in Europe. Their empires throughout the world shaped the lives of many including Australians. By the end of the decade this old world and way of operating was eroded by the First World War.

Tensions between the European nations, including Britain, erupted into the First World War over the assassination of the heir to the Austro-Hungarian empire. A small incident in a corner of Europe drew in strategic partners, and members of their respective empires. At the outbreak of the war, and as part of the British empire, Australia embraced the opportunity to support Britain.

In 1915, Australia along with New Zealand and Britain landed at Gallipoli in Turkey. It proved to be an unsuccessful campaign to take the land and the associated waters from Turkey. Australian troops continued to fight in the Middle East, and on the Western Front in Europe through France and Belgium. Of all the wars Australia has fought in, the First World War remains the costliest in terms of life lost or wounded. Over 400,000 men enlisted with 60,000 killed and 156,000 wounded or taken prisoner.

Women also volunteered to serve in the First World War, with nurses stationed in or near battlefields that Australians fought. Women at home also played a strong volunteering role. Women established sizeable charities to support men overseas and raised funds to buy them food, knit gloves and scarves and provide support on their return home. One thousand First Nations men also volunteered to fight in the war, at a time when they did not have citizenship rights within their own country. It is possible many enlisted without revealing their origins as Indigenous men were not accepted into the Australian Infantry Force.

Australian and New Zealand troops land at Gallipoli in Turkey in April and retreat December 1915.

The Australian Red Cross formed in 1914.

The Spanish flu, a global influenza epidemic, arrived in Australia 1919.