Bunda has a problem. His older brother Garadi acts like Bunda doesn't exist. Will they ever learn how to stop teasing each other and become friends as well as brothers? 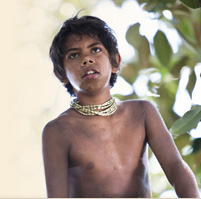